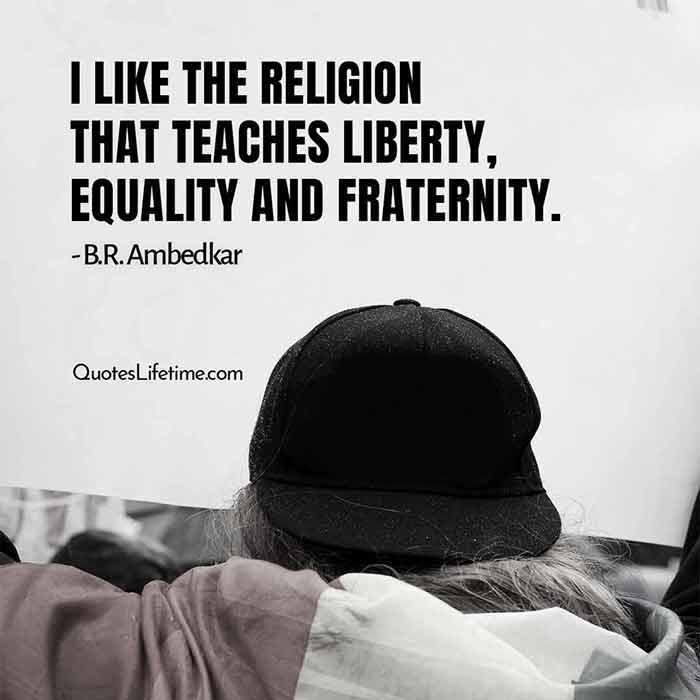 "I like the religion that teaches liberty, equality and fraternity." 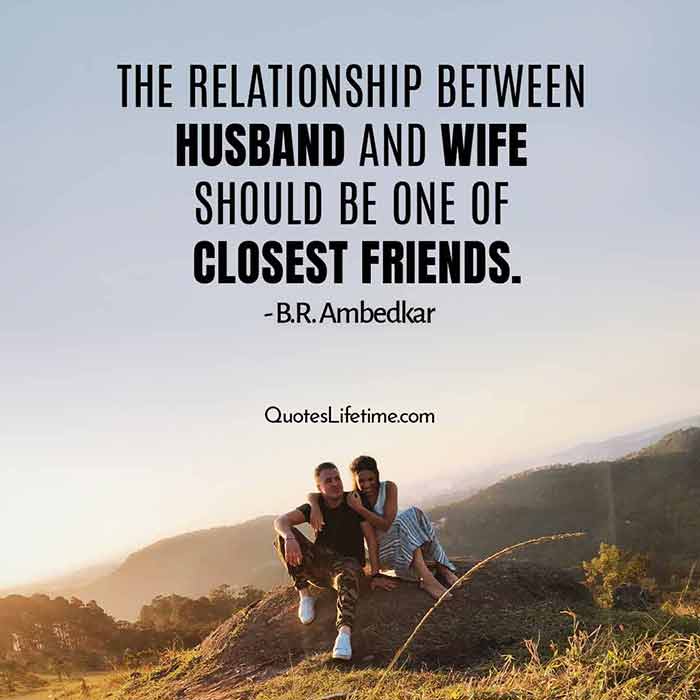 "The relationship between husband and wife should be one of closest friends." 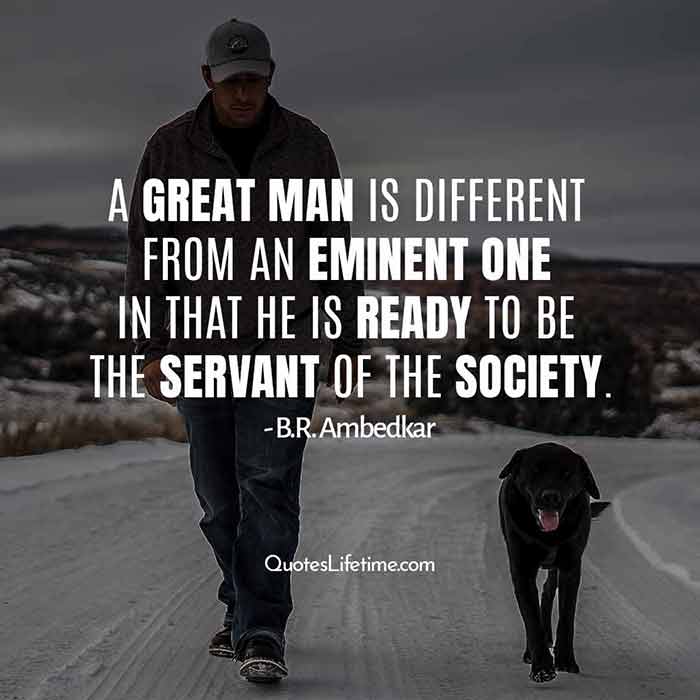 "A great man is different from an eminent one in that he is ready to be the servant of the society." 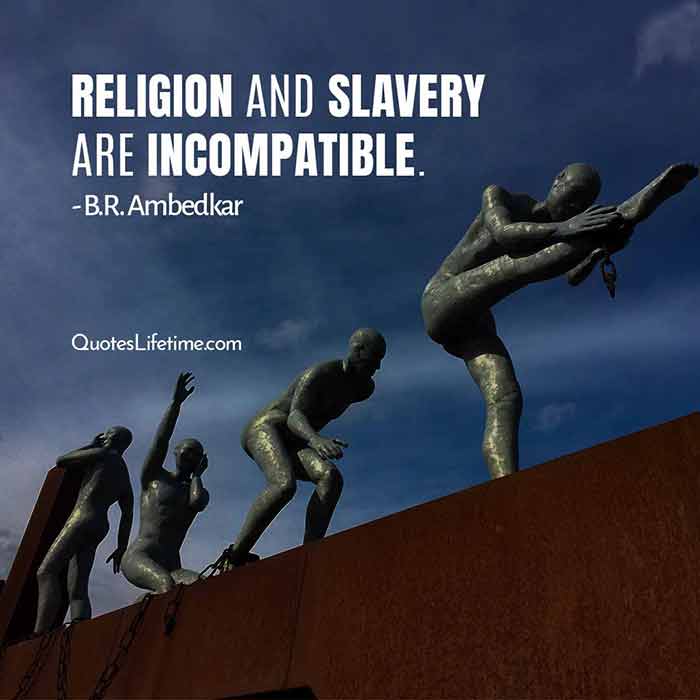 "Religion and slavery are incompatible." 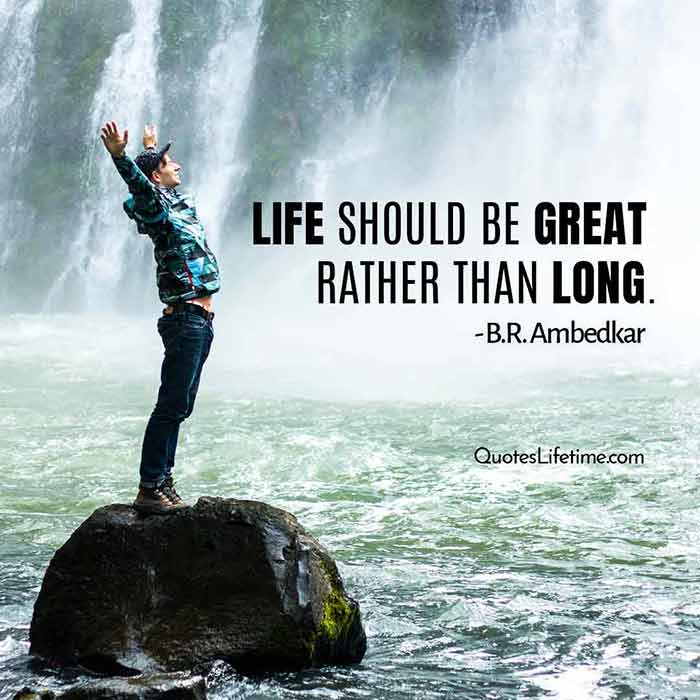 "Life should be great rather than long." 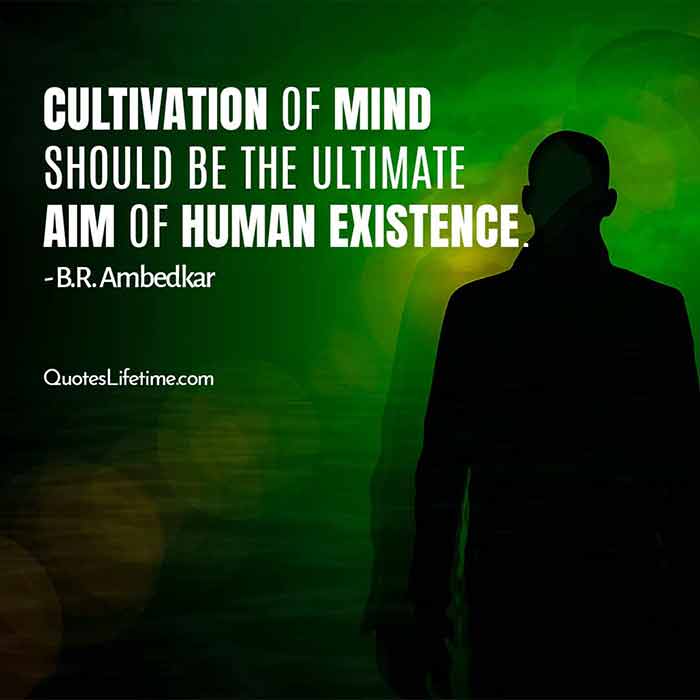 "Cultivation of mind should be the ultimate aim of human existence." 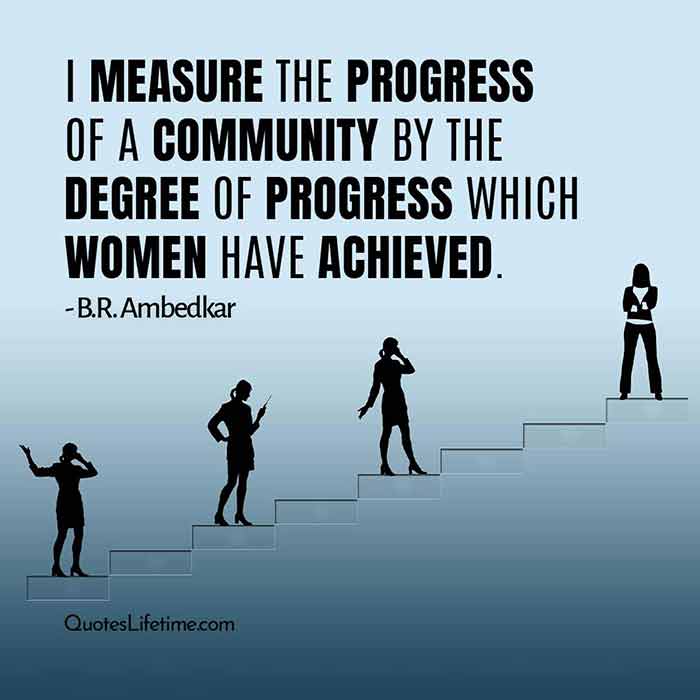 "I measure the progress of a community by the degree of progress which women have achieved." 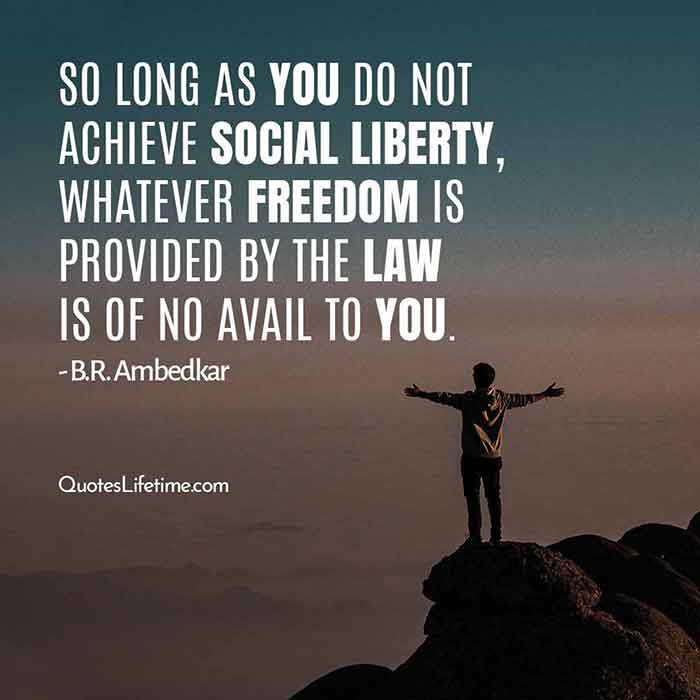 "So long as you do not achieve social liberty, whatever freedom is provided by the law is of no avail to you." 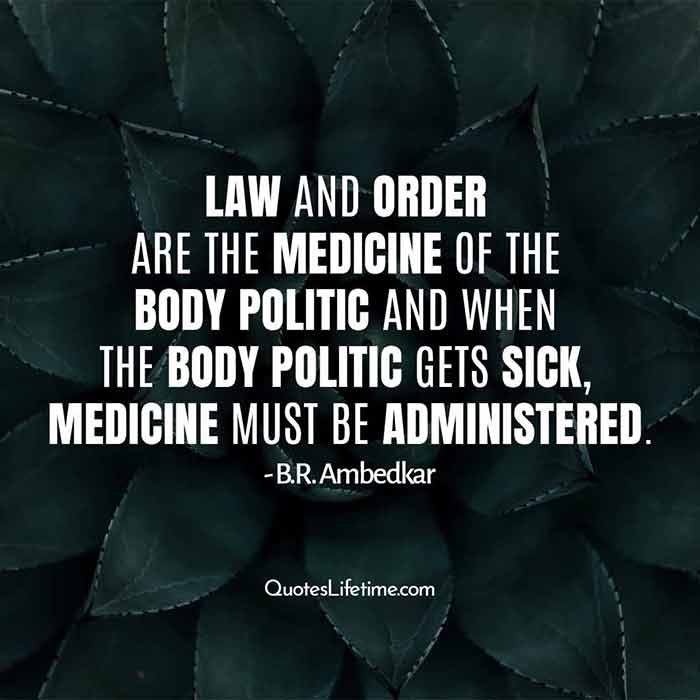 "We are Indians, firstly and lastly." "Men are mortal. So are ideas. An idea needs propagation as much as a plant needs watering. Otherwise both will wither and die."

Some people think that religion is not essential to society. I do not hold this view. I consider the foundation of religion to be essential to the life and practices of a society. - BR Ambedkar

Democracy is not merely a form of government. It is primarily a mode of associated living, of conjoint communicated experience. It is essentially an attitude of respect and reverence towards fellow men. - BR Ambedkar

Caste is not a physical object like a wall of bricks or a line of barbed wire which prevents the Hindus from co-mingling and which has, therefore, to be pulled down. Caste is a notion; it is a state of the mind. - BR Ambedkar

Political democracy cannot last unless there lies at the base of it social democracy. What does social democracy mean? It means a way of life which recognizes liberty, equality and fraternity as the principles of life. - BR Ambedkar

History shows that where ethics and economics come in conflict, victory is always with economics. Vested interests have never been known to have willingly divested themselves unless there was sufficient force to compel them. - BR Ambedkar

In Hinduism, conscience, reason and independent thinking have no scope for development. - BR Ambedkar

I solemnly assure you that I will not die as a Hindu. - BR Ambedkar

The sovereignty of scriptures of all religions must come to an end if we want to have a united integrated modern India. - BR Ambedkar

Generally speaking, the Smritikars never care to explain the why and the how of their dogmas. - BR Ambedkar

Political tyranny is nothing compared to the social tyranny and a reformer who defies society is a more courageous man than a politician who defies Government. - BR Ambedkar

To my mind, there is no doubt that this Gandhi age is the dark age of India. It is an age in which people, instead of looking for their ideals in the future, are returning to antiquity. - BR Ambedkar

That the object of the Brahmins in giving up beef-eating was to snatch away from the Buddhist Bhikshus the supremacy they had acquired is evidenced by the adoption of vegetarianism by Brahmins. - BR Ambedkar

For a successful revolution it is not enough that there is discontent. What is required is a profound and thorough conviction of the justice, necessity and importance of political and social rights. - BR Ambedkar

A people and their religion must be judged by social standards based on social ethics. No other standard would have any meaning if religion is held to be necessary good for the well-being of the people. - BR Ambedkar

An ideal society should be mobile, should be full of channels for conveying a change taking place in one part to other parts. In an ideal society, there should be many interests consciously communicated and shared. - BR Ambedkar

Religion must mainly be a matter of principles only. It cannot be a matter of rules. The moment it degenerates into rules, it ceases to be a religion, as it kills responsibility which is an essence of the true religious act. - BR Ambedkar

Indians today are governed by two different ideologies. Their political ideal set in the preamble of the Constitution affirms a life of liberty, equality and fraternity. Their social ideal embodied in their religion denies them. - BR Ambedkar

Indeed, the Muslims have all the social evils of the Hindus and something more. That something more is the compulsory system of purdah for Muslim women. These burka women walking in the streets is one of the most hideous sights one can witness in India. - BR Ambedkar

The reason why Broken Men only became Untouchables was because in addition to being Buddhists, they retained their habit of beef-eating, which gave additional ground for offence to the Brahmins to carry their new-found love and reverence to the cow to its logical conclusion. - BR Ambedkar

No Hindu community, however low, will touch cow's flesh. On the other hand, there is no community which is really an Untouchable community which has not something to do with the dead cow. Some eat her flesh, some remove the skin, some manufacture articles out of her skin and bones. - BR Ambedkar

People are not wrong in observing Caste. In my view, what is wrong is their religion, which has inculcated this notion of Caste. If this is correct, then obviously the enemy, you must grapple with is not the people who observe Caste, but the Shastras which teach them this religion of Caste. - BR Ambedkar

My social philosophy may be said to be enshrined in three words: liberty, equality and fraternity. Let no one, however, say that I have borrowed by philosophy from the French Revolution. I have not. My philosophy has roots in religion and not in political science. I have derived them from the teachings of my Master, the Buddha. - BR Ambedkar

That the caste system must be abolished if the Hindu society is to be reconstructed on the basis of equality, goes without saying. Untouchability has its roots in the caste system. They cannot expect the Brahmins to rise in revolt against the caste system. Also we cannot rely upon the non-Brahmins and ask them to fight our battle. - BR Ambedkar